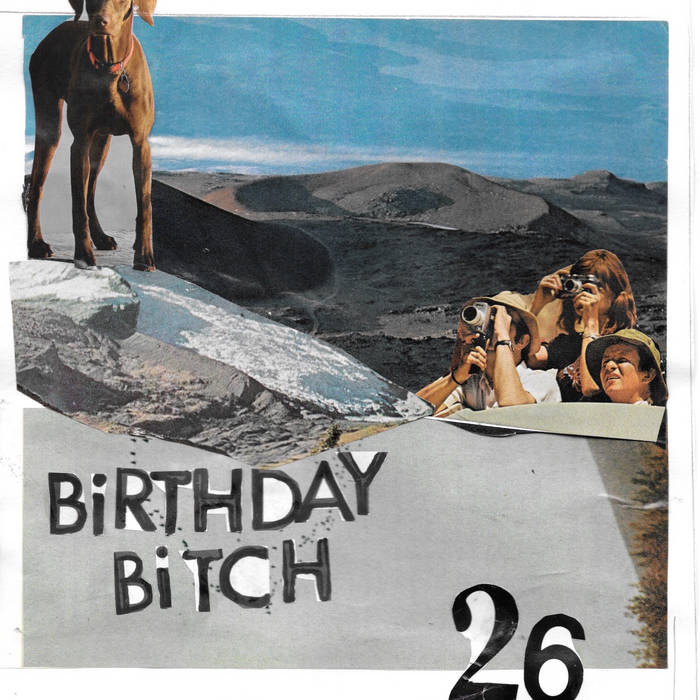 26 is the second EP from Birthday Bitch, their first being a two track demo. The latest release from the Vancouver trio captures nuanced melodies that emerge alongside lo-fi guitar work.

Birthday Bitch’s sound varies across the four tracks of 26. Though each song differs from the next, all are in a style reminiscent of something I have heard before. On my first listen, I tried to put my finger on which bands Birthday Bitch evokes or which vocalists the singing of Dorothy Marshall brings to mind. To say that Birthday Bitch works in several reminiscent styles is not to suggest a lack of uniqueness. Instead, the similarities make their music all the more moving because their sound is recognizably evocative.

26’s opening track “Nocturne,” for instance, recalls the driving percussion and impassioned vocals of “Maps” by Yeah Yeah Yeahs. The dissonant guitar and pronounced bass on “Nocturne” are in contrast with Marshall’s shaded vocals. Softly melodic at the song’s start, her voice rises to match the heavy distortion of the chorus.

“Too Close,” on the other hand, builds slowly around Marshall’s whispered, breathy vocals. Hanna Fazio’s percussion and the mounting force of Shelby Vredik’s guitar make the track an instrumental standout. With a sultry sound that recalls Angelo Badalamenti’s score for Twin Peaks: Fire Walk With Me, “Too Close” could make an apt addition to a David Lynch film. Marshall’s vocals crescendo in shouts before “Too Close” fades into silence.

The slow burning sound on the EP’s first half is in contrast with the near-frantic pace of the latter half of 26. “Teeth” and “Harwitch” are more in keeping with sound of Birthday Bitch’s late 2016 demos. Marshall speak-sings on the chorus of “Teeth,” in a predominantly monotone style that differs from her breathy delivery on “Too Close.” Uptempo closing track “Harwitch” is danceable lo-fi rock that would make a well-received addition to a Birthday Bitch live show.

Though they have only released six songs so far, Birthday Bitch is already making music that stakes its claim within the West Coast lo-fi scene. While there is certainly a market for their upbeat tracks, they have the ability to make an impact with their moody, multifaceted brand of rock.

This review was originally published in the June  2017 issue of Discorder Magazine.